Well, what a night!

We were delighted with the number in the audience who, despite competition from another choral concert close by, chose to support our merry band. I think we have decided to avoid trying to stage concerts at ‘pinch points’ so we don’t clash with other societies who will always stage concerts at the end of term.  This aside, the concert went well and the audience were certainly appreciative.  They were especially surprised to see an over sized Teddy Bear appear at the end of the concert, ably helped by some of our young choristers.

Highlights included a beautiful rendition of the Lakme Flower duet by Delibes, performed by Sopranos Rachel Allard and Susan Coates, The Pearl Fishers’ duet by Bizet sung by Tenor, Carlos Alonso and Baritone, William Tyson Smith, a full choral rendition of The Chorus of The Hebrew Slaves from Nabucco by Verdi and, of course, the abridged arrangement of Bizet’s Carmen by Maurice Besly. We were very grateful to our young choristers from St John’s Church in Devizes and some pupils from Stonar School, who were trained by our Artistic Director, Susan Coates.

The ‘Besly’ arrangement of Carmen misses out a few of the numbers we thought should be included, so we extended the Card Trio, harmoniously sung by Rachel Allard, Sophie Meehan and Susan Coates, added in the Flower Song, charmingly performed by our own Spanish Tenor, Carlos Alonso and sang the full version of the Toreador’s Song with Basses Andrew Hopwood and William Tyson Smith sharing a verse each. This served to finish the whole performance and was met with thunderous applause from an audience who were singing along by the end.  Other notable performances were given by Tenor, Guy Edwards singing the Canzonetta as a solo, young Soprano Emily Beer, singing with Opera Sulis for the first time and Bass Graham Case, a stalwart member of the company. As ever we were expertly accompanied by Nick Goodall, who almost certainly had the hardest job of the evening.

Bass-Baritone Will Tyson Smith at our Operatic Gala Concert, 1 April 2017 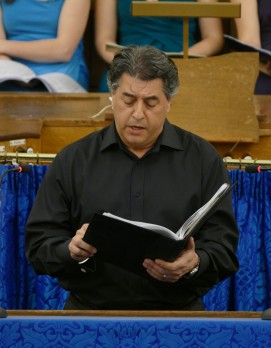 A total of £1,270 was raised for the RUH Forever Friends Appeal in aid of the new Cancer Care Centre at the hospital.