We have had an exciting start to 2019 with our Artistic Director’s visit to New York to sing in the Sir Karl Jenkins 75th Birthday Concert at Carnegie Hall, in January.  It was a magical experience to meet and work with the composer, and his team, which included world famous conductor Jonathan Griffith, and to be part of a choir chosen to represent the UK for a performance of his Symphonic Adiemus.  You, too, can see the whole concert on YouTube by following the link below.  Susan features in the first half. Listen out for those top notes, especially in the last movement.

Our next concert is a booking for a quartet of Opera Sulis soloists to perform with The Thames Head Singers on the 6th of April in beautiful Minchinhampton.  Soprano – Susan Coates, Mezzo Soprano – Anne Braley, Phillip Borge – Tenor and Ashley Bremner – Bass will join the choral society to sing Rossini’s Petite Messe Solennelle (Little Solemn Mass) which was  written in 1863, possibly at the request of Count Alexis Pillet-Will for his wife Louise to whom it is dedicated. The composer, who had retired from composing operas more than 30 years before, described it as “the last of my péchés de vieillesse” (sins of old age).

This unusual piece was originally scored for twelve singers, four of them soloists, two pianos and harmonium. The mass was first performed on 14 March 1864 at the couple’s new home in Paris. Rossini later produced an orchestral version, including an additional movement, a setting of the hymn “O salutaris Hostia” as a soprano aria. This version of the mass was not performed during his lifetime because he could not obtain permission to perform it with female singers in a church!

We are looking forward to being under the ‘baton’ of Andrew Hopwood who has himself  performed as a soloist with Opera Sulis on many occasions. 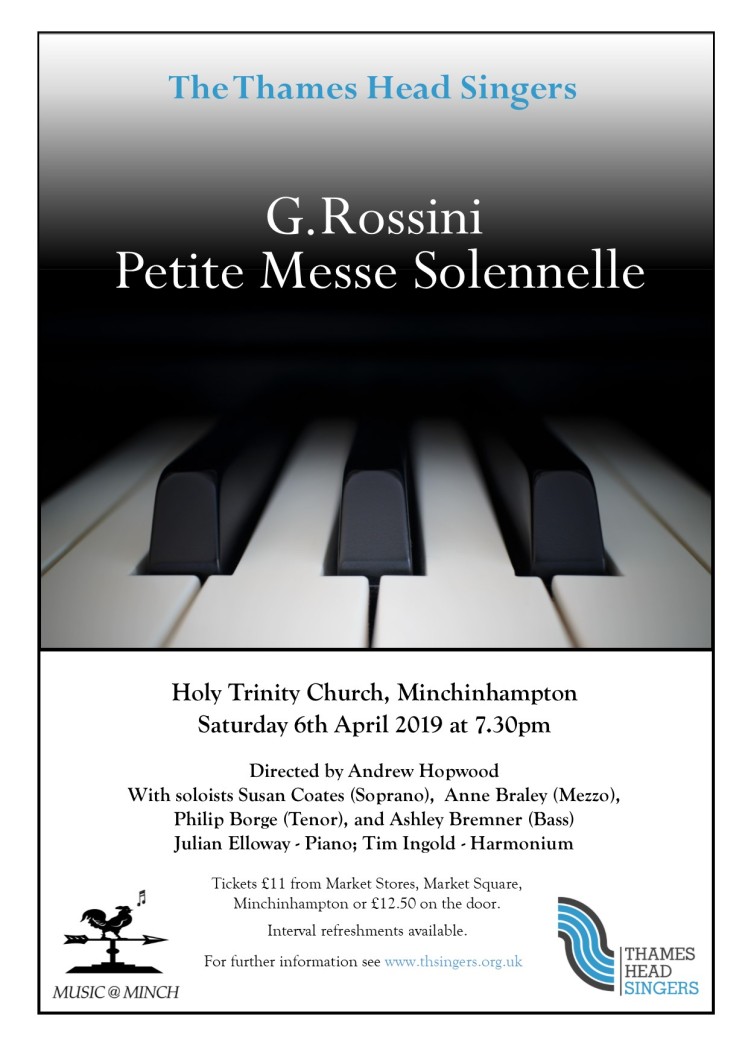 We have just received a booking on Tuesday the 9th April to perform with our colleagues in Musica da Camera at The White Lion Inn, Bourton, Dorset.  These events get sold out very quickly so do make sure you ring and book early!  More details will follow as we get them.  You can click on the link to find out how to contact the Inn directly.

We have some other events already lined up for later in the year, but for now, very belatedly, can we wish you a Very Happy 2019!

With very best wishes from